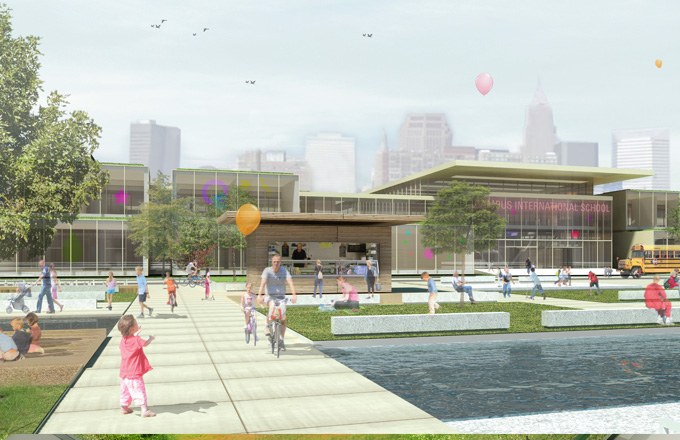 In 2011, Cleveland Design Competition: A New School Vision challenged entrants to propose designs for a new K-12 public school in downtown Cleveland. At a time when educators are implementing dramatic new ideas in pedagogy, curricula and organizational models, the reinvention of learning environments deserves equal attention. The 2011 Cleveland Design Competition presented an opportunity to re-imagine the school and explore how educational facilities must evolve to provide world class opportunities for learning.

Design Principal-in-Charge, Daly Genik | AIA Kevin Daly, AIA received his Bachelor of Architecture degree from the University of California and his Master of Architecture degree from Rice University. He has been a principal of his own firm for over seventeen years. Prior to establishing a partnership with Chris Genik in 1990, Kevin worked with Hodgetts + Fung and Frank Gehry. Kevin is the Design Principal-in-Charge for all the office projects including the award-winning Valley Center House, the Camino Nuevo Charter Academy, the Slot Box House, and the new Art Center College of Design South Campus Building. Current projects include new offices for BMW/Designworks USA, The UCLA Music Facilities Study, and the Harvard University Art Museums Art Center. In 1999 Kevin Daly and Chris Genik were selected as one of eight Emerging Voices by the Architectural League of New York and featured on the cover of Metropolis. In 2005 the office was one of only five American design firms feature in 10 x 10_2 by Phaidon. Kevin has taught at UCLA, SCI-Arc, ASU, and UCSD and is a member of the advisory board of the University of Southern California's Center for Sustainable Cities.

K-12 Education Global Market Leader, Perkins + Will | AIA | REFP | LEED AP Steven leads the K-12 Educational Facilities Group of Perkins+Will, an international award-winning architectural firm specializing in the research-based planning and design of innovative and sustainable educational facilities. In Mr. Turckes' 23-year career his work has focused on the programming, master planning and implementation of numerous K-12 projects across the nation and abroad. An avid reader and strategic thinking about the evolving nature of our global society and economy, Mr. Turckes often assists schools navigate change to create flexible environments that support critical learning and skill acquisition objectives; helping to prepare students for success now and in the future. His experience and understanding of the key issues surrounding K-12 facilities have led to numerous presentation at regional and national educational conferences on a broad range of topics from planning 21st century schools to safety and security to green architecture and its use in school facilities.

Principal, KieranTimberlake | AIA | LEED AP David is a Principal at Kieran Timberlake, an internationally recognized architecture firm noted for its commitment to research, innovation and invention. He has been with KieranTimberlake for over twelve years. He current oversees Yale-NUS College, a n ew liberal arts college in Singapore, an expansion to the Michener Art Museum in Bucks County, PA, the Film and Media Studies school at Lafayette College, in Easton, PA, and the Northwest Campus Student Housing project at the University of California, Los Angeles. David has been responsible for a range of award-winning projects including the Durham Academy Lower School in Durham, NC, the West Campus Residential Initiative at Cornell University in Ithica, NY, and Cellophane House for The Museum of Modern Art in New York City. Projects he has been responsible for have been featured in Architect, Architectural Record, I.D. Magazine, Metropolis, TIME, The New York Times, and Wired. David received a Bachelor of Architecture from Temple University and a Master of Architecture from the University of Pennsylvania. He has over twenty years experience in the United States and abroad. Early in his career David practiced in Japan with Atelier Ryu Team Zoo and taught architectural design in Taiwan.

Associate Professor of Architecture, University of Detroit Mercy | Associate AIA Amy Green Deines received her Master of Architecture from the Cranbrook Academy of Art in May of 2000. Amy has a diverse design background that builds on her academic training in industrial design and architecture. Her teaching and research interest stem from an interdisciplinary approach that seeks to encompass both visual communications and the built environment with specific focus on design, cultural mapping and new technologies. Amy is an Associate Professor of Architecture at the University of Detroit Mercy where she teaches Architectural Design Studios, Graphic Design, and Graduate Seminar. Amy is a professional designer with experience in both the public and private sector, specializing in architecture, graphic design and urban design.

Superintendent, Various School Systems | Senior Director of Educational Services, WVIZ/Ideastream Dr. Linda Williams joined WVIZ/ideastream in November 2009 as the new Senior Director of Educational Services, responsible for all educational programs for the public television and radio station from preschool to college graduation. She brings with her a wealth of leadership and communication skills, training and expertise in the areas of special education, strategic planning, and continuous improvement planning Most recently, she was County Superintendent of the Lake County Educational Service Center. She had previously been superintendent of schools in Richmond Heights City School district and an Assistant Superintendent in Mentor School District. In addition, she has been a teacher and served as chair of the Department of Education at Hiram College. Dr. Williams is a graduate of the American Association of School Administrators Strategic Planning training program and participated in Leadership Training Seminars and the National Security Seminar at the United States Army War College. She has facilitated over 70 strategic plans for school districts and agencies. Dr. Williams is a graduate of Kent State University and holds a B.S. in Elementary and Special Education, an M.Ed. in Teaching Exceptional Children and a Ph.D. in Administration and Special Education. She is a graduate of the Case Western Reserve University Weatherhead School of Management Professional Fellows Leadership Program. Dr. Williams was appointed to the Lakeland Community College Board of Trustees by the governor of Ohio in 2007.
*The Jury member descriptions were written at the time of the competition, and have not been kept up to date since the particular competition for which that person was selected as a jury member.