Organizer & Co-Founder
Michael Christoff is an architectural designer with 7 years of architectural experience working on a variety of project types including extensive mixed-use, restaurant/bar, printing facilities/industrial, offices, and urban design. Michael currently works at Vocon; an architectural and interior design firm with offices in Cleveland and New York. In addition to the architectural experience, he has also remained very involved in the professional and civic community including, but not limited to: co-founding the annual international Cleveland Design Competition, co-founding PechaKucha Night Cleveland, currently serving on the Board of Directors of SPACES, the Advisory Board of the CMSD/CSU Campus International School, and having in the past served on the Board of Directors for the American Institute of Architects. Michael was awarded the 2010 AIA Ohio Public Service Award along with competition co-founder Bradley Fink for his community involvement and the contributions of the Cleveland Design Competition. He earned his Bachelor’s and Master’s degree in Architecture at the College of Architecture and Environmental Design at Kent State University in 2005.

Organizer & Co-Founder
Bradley Fink is an Intern Architect with 7 years of architectural experience in all stages of building design and construction for healthcare, workplace and cultural arts projects. Bradley currently works at the Cleveland architecture and engineering office of Westlake Reed Leskosky and is pursuing professional registration in the State of Ohio. In addition to co-founding the annual Cleveland Design Competition, Bradley serves on the Far West Design Review Committee for the City of Cleveland Planning Commission and as a member of the Historic Warehouse District Public Realm Committee, which identifies priorities for improving streetscape and public spaces in the downtown neighborhood. Bradley was awarded the 2010 AIA Ohio Public Service Award along with Michael Christoff for his community involvement and the contributions of the Cleveland Design Competition. He earned his Bachelor’s degree in Architecture at the College of Architecture and Environmental Design at Kent State University in 2005. 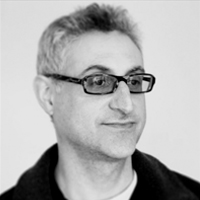 Steve Rugare teaches courses in history and theory of architecture and urbanism at both the CUDC and the Kent Campus. Among his current courses are the CUDC seminar “Forces that Shape Cities” and a special topics course at Kent on “World’s Fairs and Architecture.” He also is coordinator of the CUDC student’s capstone research for the MUD degree.. Steve collaborates on the CUDC’s communications and public programs, with a particular emphasis on exhibits, lectures and the production of the “Urban Infill” book series. He serves as an advisor to the annual Cleveland Competition and sits on the advisory committee for the Levin College Forum Program at CSU. He has presented his research on urban and architectural history at the International Planning History Society and other venues. Before coming to CUDC, he taught at Oberlin College and the University of California at Santa Cruz. He received his bachelors in political philosophy from Michigan State University and an MA from the History of Consciousness Program at UC Santa Cruz.

Terry Schwarz is the director of Kent State University’s Cleveland Urban Design Collaborative (CUDC). Her work at the CUDC includes neighborhood and campus planning, commercial and residential design guidelines, stormwater management and green infrastructure strategies. Terry launched the CUDC’s Shrinking Cities Institute in 2005 in an effort to understand and address the implications of population decline and large-scale urban vacancy in Northeast Ohio. As an outgrowth of the Shrinking Cities Institute, she established Pop Up City, a temporary use initiative for vacant and underutilized sites in Cleveland. In 2009, Terry received the Cleveland Arts Prize for Design. She teaches in the graduate design curriculum for the KSU College of Architecture and Environmental Design. She has a Bachelor’s in English from the Illinois Institute of Technology and a Master’s degree in City and Regional Planning from Cornell University.

Founder, GoodWorks Group & representative to the Lincoln Institute of Land Policy
Daniel is Founder and Owner of GoodWorks Group a consulting firm to nonprofits and foundations in the area of capital campaign management, fundraising and philanthropy.
Loading